March winds and April showers bring forth May flowers..... 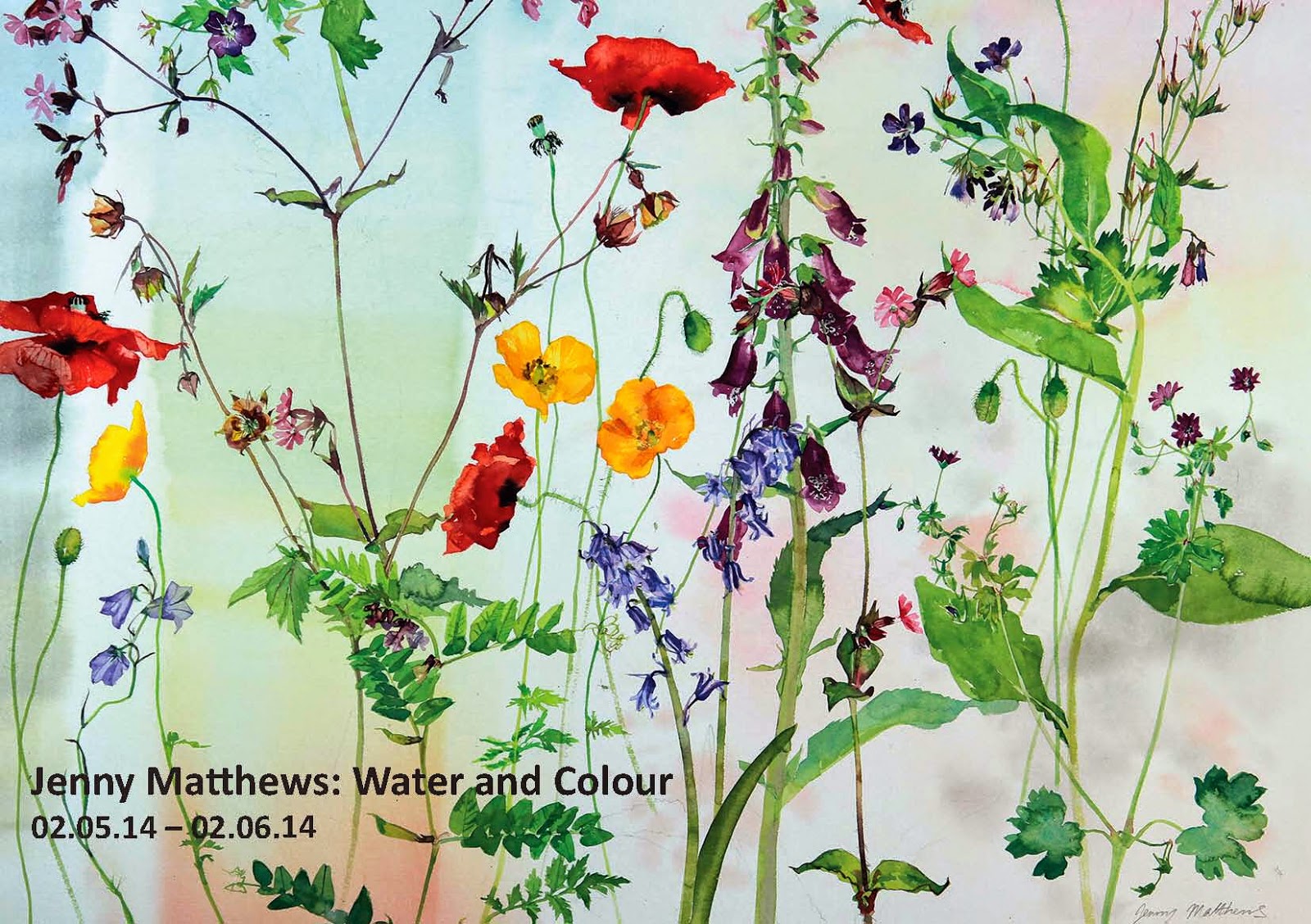 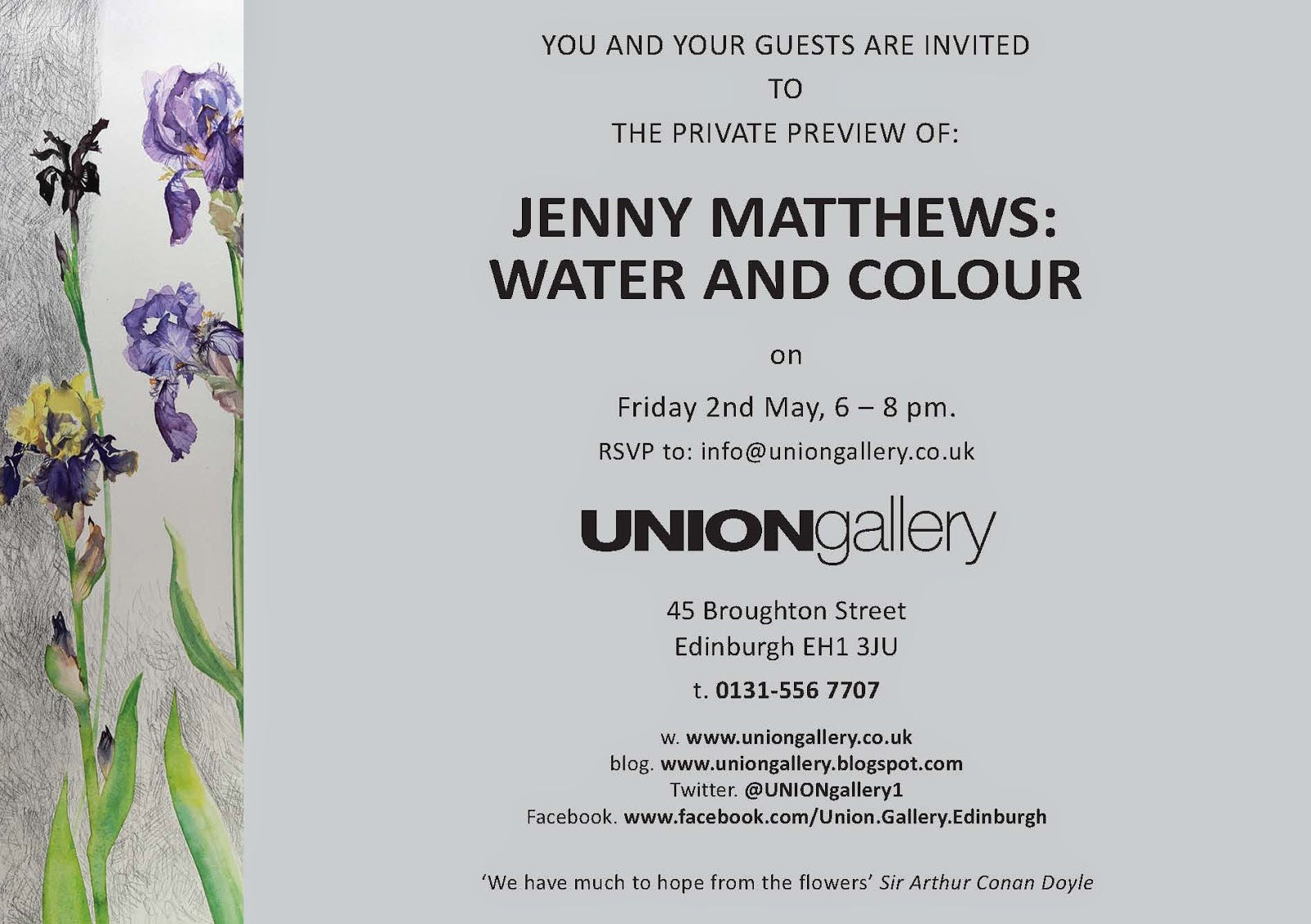 The Jenny Matthews solo exhibition 'Water and Colour' opens on Friday.
Looking forward to seeing you all then
x
Posted by Union Gallery at 06:24 18 comments:

April is the Cruelest Month 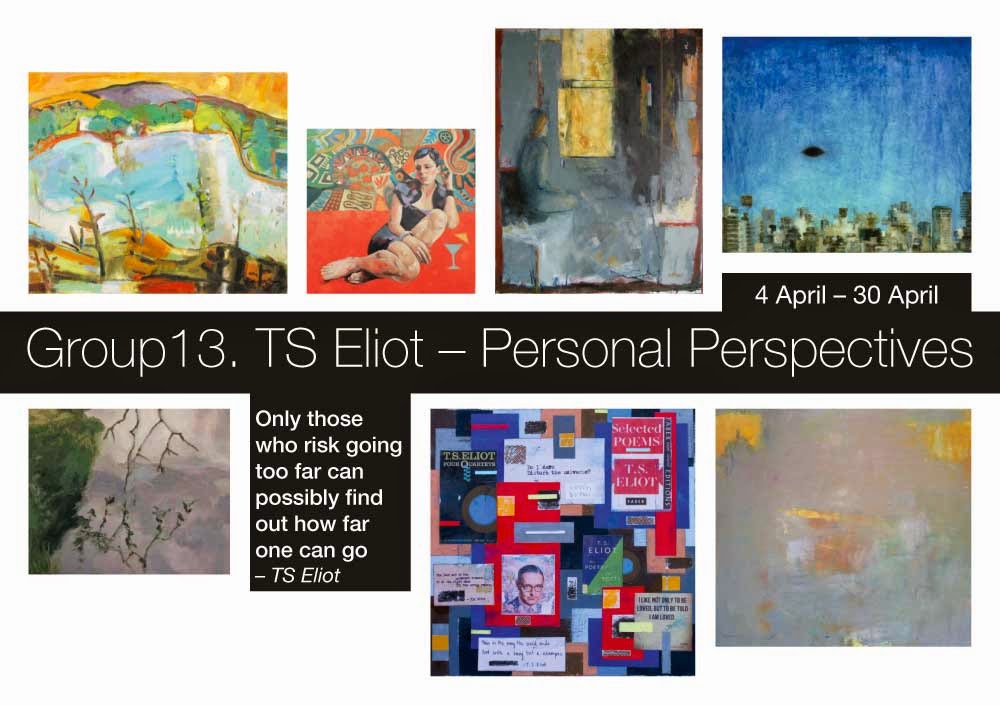 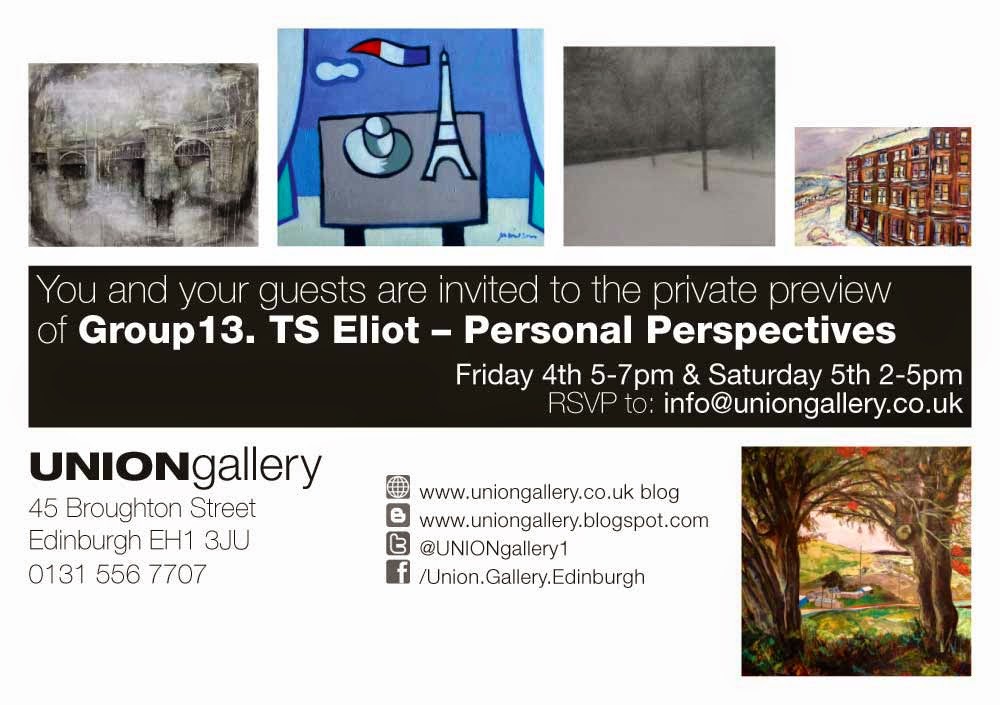 So April 1st sees the end of the incredible 'Dark Arcadias' exhibition by Keith Epps.

Not really sure how I'm feeling. Happy that Keith's work has been so well received and that 13 of his astonishing paintings found homes, but also sad. Sad perhaps that such a phenomenal talent had gone unnoticed for so long. I guess the time was right for Keith now.

I think I'm also a little sad that tomorrow his work will be gone.....such is the impact it's had on me.
However, it has truly been an honour to have been in it's company for a month and I can only say a huge thank you to Keith Epps and his ever supportive wife, Colby, for such a wonderful exhibition. 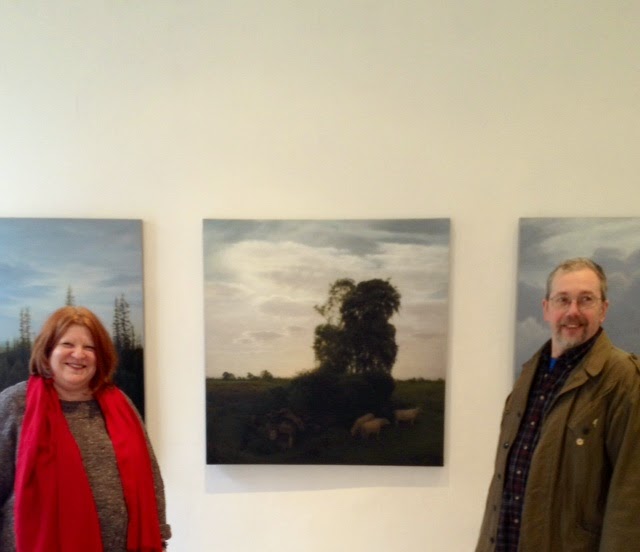 Speak soon x
Posted by Union Gallery at 09:44 No comments:

Something for the Week Ahead

I thought I'd share some snaps from the incredibly busy Keith Epps exhibition opening to help ease you into a new week.

Lets start with this one: 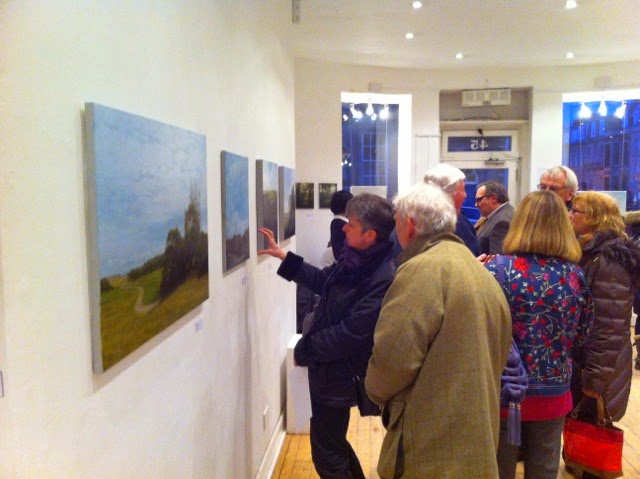 I've picked this one as it's not so hectic you can actually see some paintings! 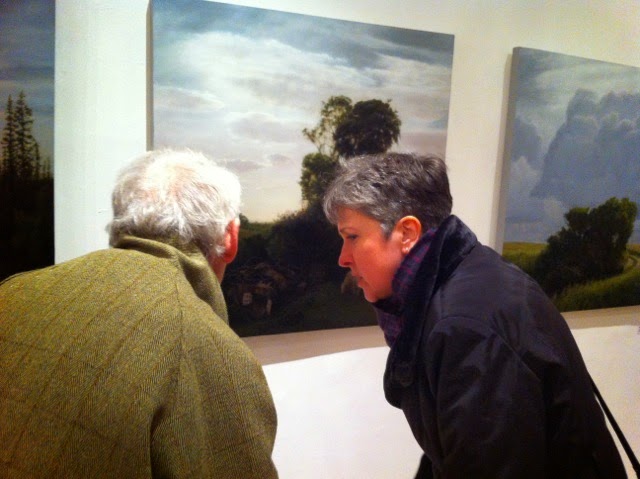 Here at UG headquarters some of you will have heard me refer to a painting's 'pulling power'. I think it's fair to say that Keith Epps paintings score full marks in this area.
On first viewing an Epps painting, you are presented with a beautiful, immaculately finished and executed work of art, but then on closer inspection, you discover that not all is at it seems in Paradise/ The Garden of Eden. I think the above photo demonstrates Keith's pulling power perfectly. 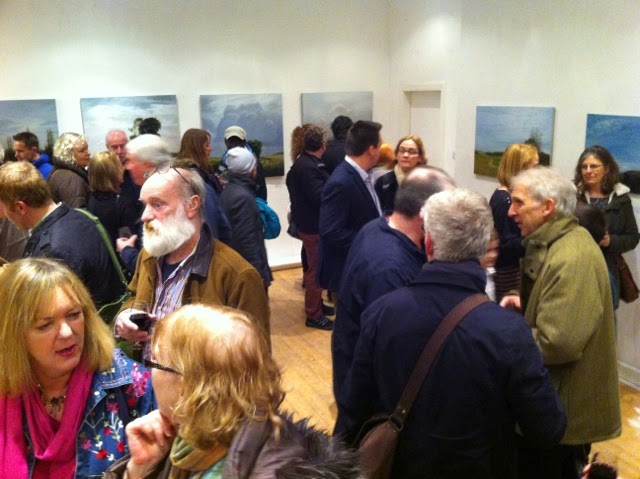 And just before it got REALLY busy... 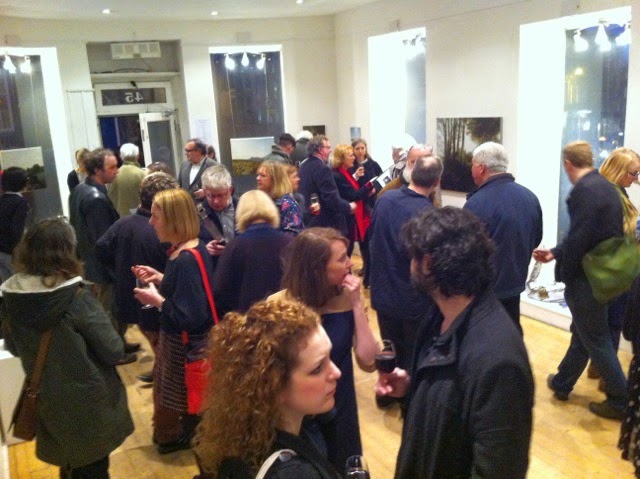 Leaving you with this.... 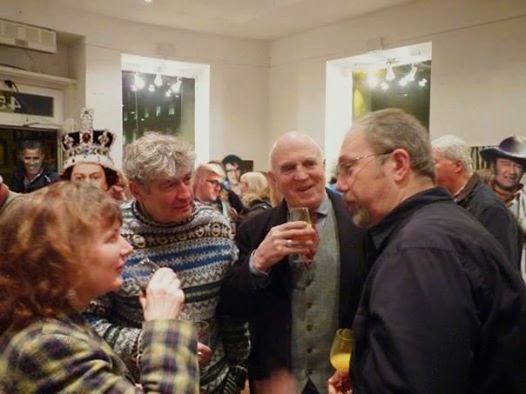 I have said of Keith Epps' paintings that not all is as it seems and the same came also be said of this photo from the opening. Enjoy spotting our regal and rebellious special guests!

Have a great weekend all x
Posted by Union Gallery at 04:01 1 comment: 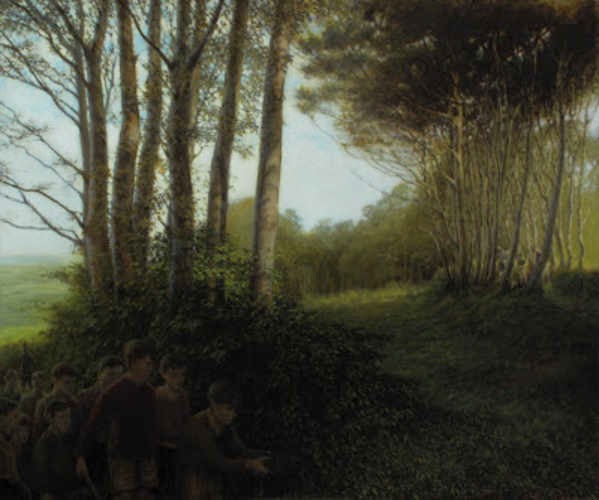 Here's what the man himself has to say:


"I began composing this last autumn and started work on the canvas this January, but I really don’t know why it has taken so long and been so unnecessarily difficult to complete. Right up to the end it has seemed to fight back hard, and I’ve had to make many adjustments, corrections, and inventions to make it work. Still, it only gets painted once, and I think it’s worth getting it as right as I can.
This is a strongly narrative painting based on something I saw in my childhood. It shows two moments a couple of minutes apart; three of the figures on the left are repeated on the right. The location is literally just up the road from a previous painting – the far tree behind the main group on the left is the main tree in Wreck No.12, and both pieces share the sunlit vista on the left.
This painting has also had an extraordinarily long incubation period. I found this location in summer 2011, but had no idea what to use it for. Then, last autumn, I realised that it was the setting for an idea that I’d first tried out in 1981, but which I’d not been able to take forward. I dug out those drawings from my pile of sketchbooks, and set about reworking them into this setting.
The figures on the right were quite troublesome. They had to be small and unfocussed - too much detail would have drawn the eye – and, as what I think they are doing is shameful, I wanted then half-hidden. They had to be arranged so that their actions could be read, but partly obscured by the trees.
The foreground group was carefully composed using images sourced from both the Interweb and from my own childhood photos. The placing was crucial; particularly where the crow sits in relation to the palest tree. I wanted the crow to seem just slightly separate from the group holding it, and that vertical line does just that. I had roughly sketched this group out on paper, but the precise composing was done with photoshop layers, one for each figure, over the background image. I just moved them about, and back and forward, and adjusted them into the setting until they worked as I wanted them to. Before you ask – no, I’m not there.
Happily, there is clear evidence in the middle and right foreground of last month’s study of leaves, though some appear less beech than rhododendron.
Technically there’s nothing new here, though I did finally resort to buying Cadmium yellows for making the thin greens of indirect light in the central grassy area. These pigments are phenomenally powerful (and at £18 a tube phenomenally expensive). They do the job though, so respect due…
The original, autobiographical, incident happened in the mid 1960s, when I was a sensitive little boy of about nine or ten. I was at a boarding school that was enclosed by woods, and there were always a lot of rooks and crows about. One beautiful late summer afternoon I was just pottering about outside and a group of older boys approached, to pass me, going away from the school towards a shallower line of trees beside the cricket pitch. The lead boy was carefully carrying a crow, and as I was smaller, I was very close to it. A leg hung down and its beak was open, and it blinked with a milky eyelid.
‘Where are you going with that?’ I said
‘It’s injured, so we’re going to kill it’
I didn’t understand. I started to cry, so they pushed me to one side and kept me at a distance while the three biggest boys took the crow into the trees, laid it on the ground, and beat it to death with sticks. And I was horrified, and I screamed and screamed.
Thinking about it now I’m still very sad. I think that, even at the time, I was aware of why they were killing this crow. Not - as they had lightly convinced themselves - out of pity to save its suffering, but out of curiosity and cruelty, to find out what it was like.
And fifty years on I still remember it, and how the light was flooding through the trees."
Fascinating stuff, eh?
Speak soon.
Posted by Union Gallery at 08:48 No comments: 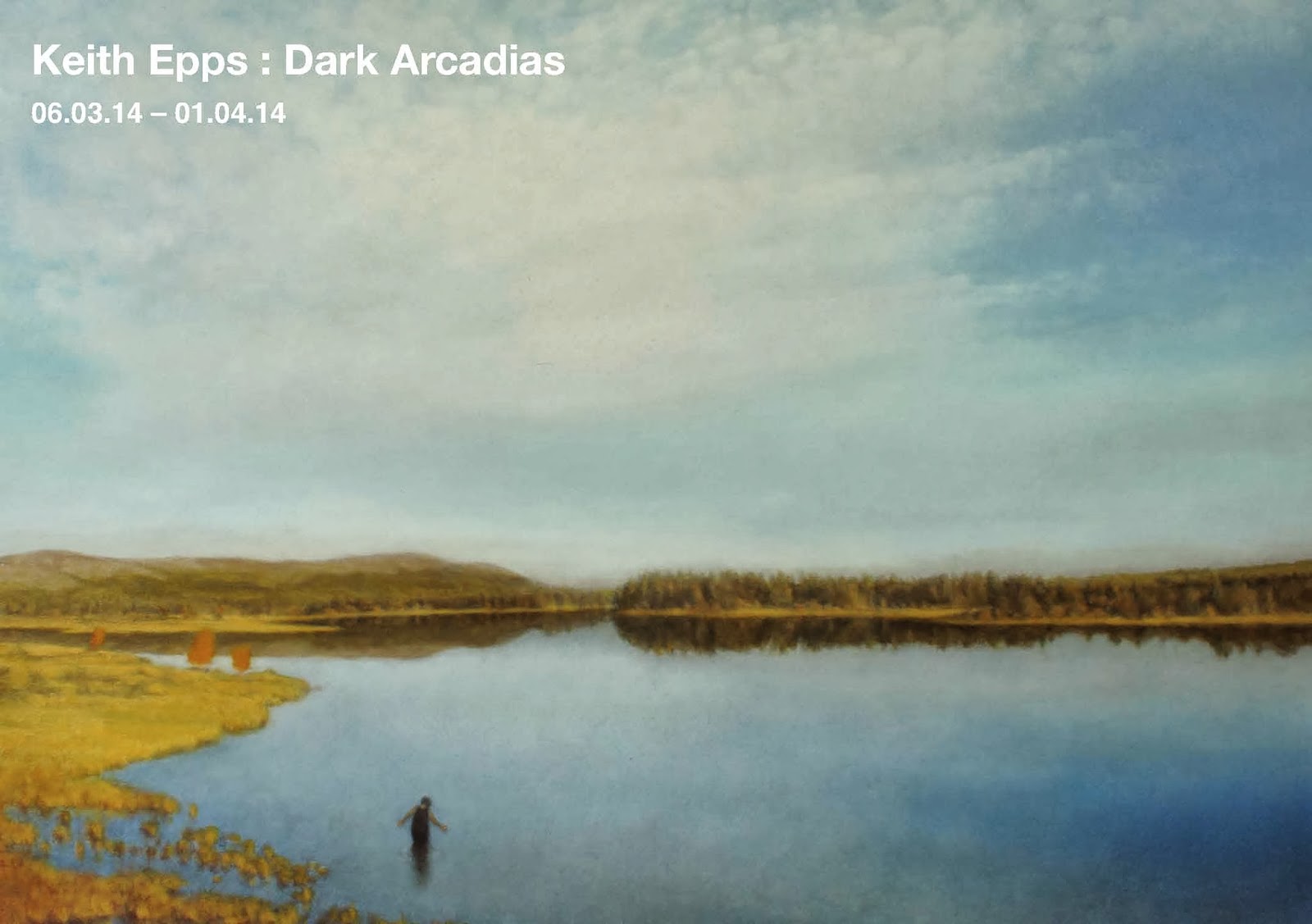 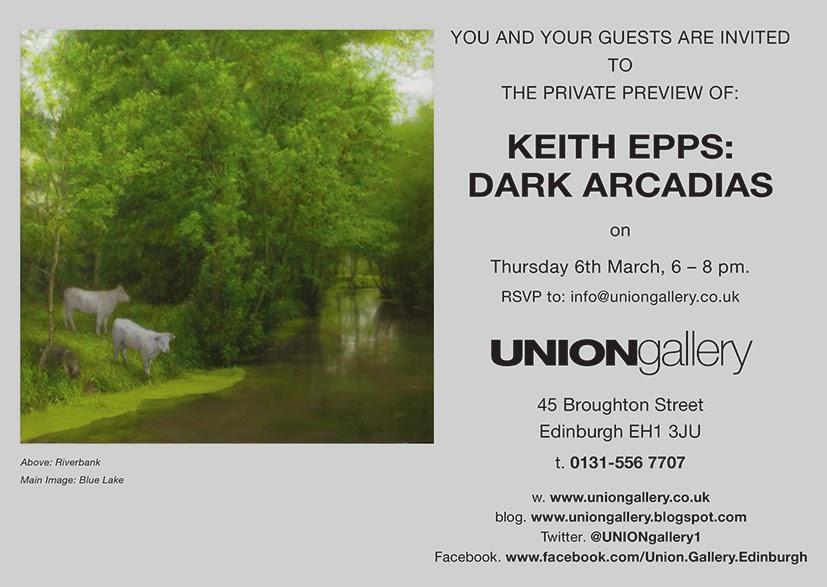 TIP. This is a must see exhibition!

Many of you will know that this Friday sees the Chinese New Year and that we are entering the year of The Horse. At Union Gallery, we are particularly aware of this fact this year as our fantastic intern, Jenna, has gone home to China to celebrate, and we are missing her keenly.

The Year of the Horse is a good one in many ways: for those like Jenna, born on a horse year, the good news is that it is suggested that they are cheerful, popular, talented and enjoy entertaining. They are associated with success and cannot stand failure. For those of us not born on a horse year, the year ahead will apparently bring health and prosperity.  I, for one, fully intend to embrace that prediction.

Small wonder, then, that the wonderful Barbara Franc sculpture, 'A Sure Thing', was one of the first pieces to sell in her recent exhibition and, sure enough, it was sent to an eager client of ours in China.  Lucky chap: 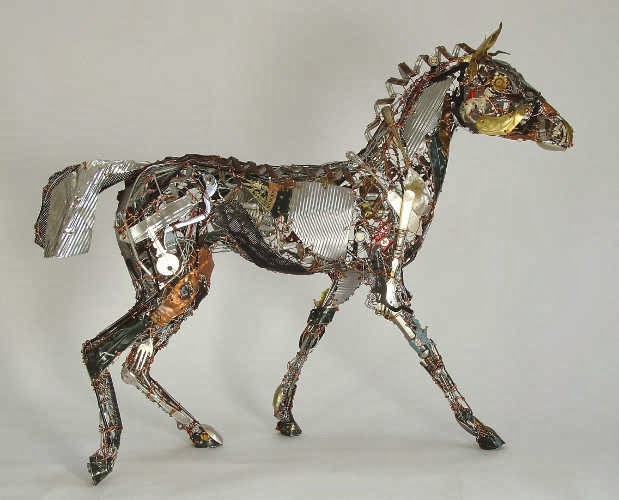 'A Sure Thing', steel wire and recycled material, by Barbara Franc.

And small wonder that the exquisite little painting, 'Black Prince', by great Edinburgh artist Henry Kondracki, which is currently hanging in the gallery, is attracting so much attention: 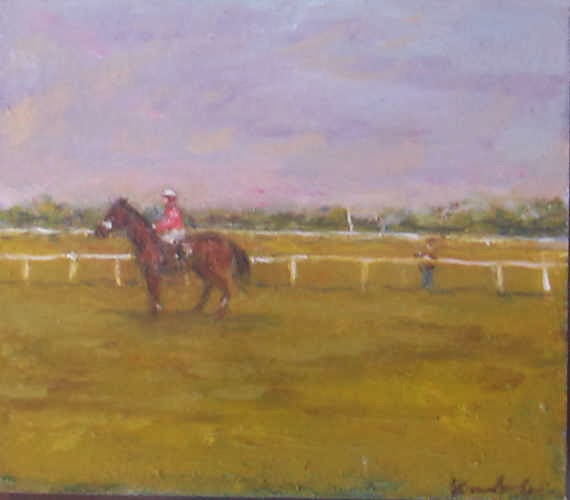 'Black Prince', oil on canvas, by Henry Kondracki.  Such a beautifully observed painting: I am pretty confident that it will soon find a new, enlightened and soon to be prosperous home.

And, of course, we are still lucky enough to have two lovely Horse Puppets by the brilliant Barbara Franc - the perfect companions to a really successful Chinese New Year: 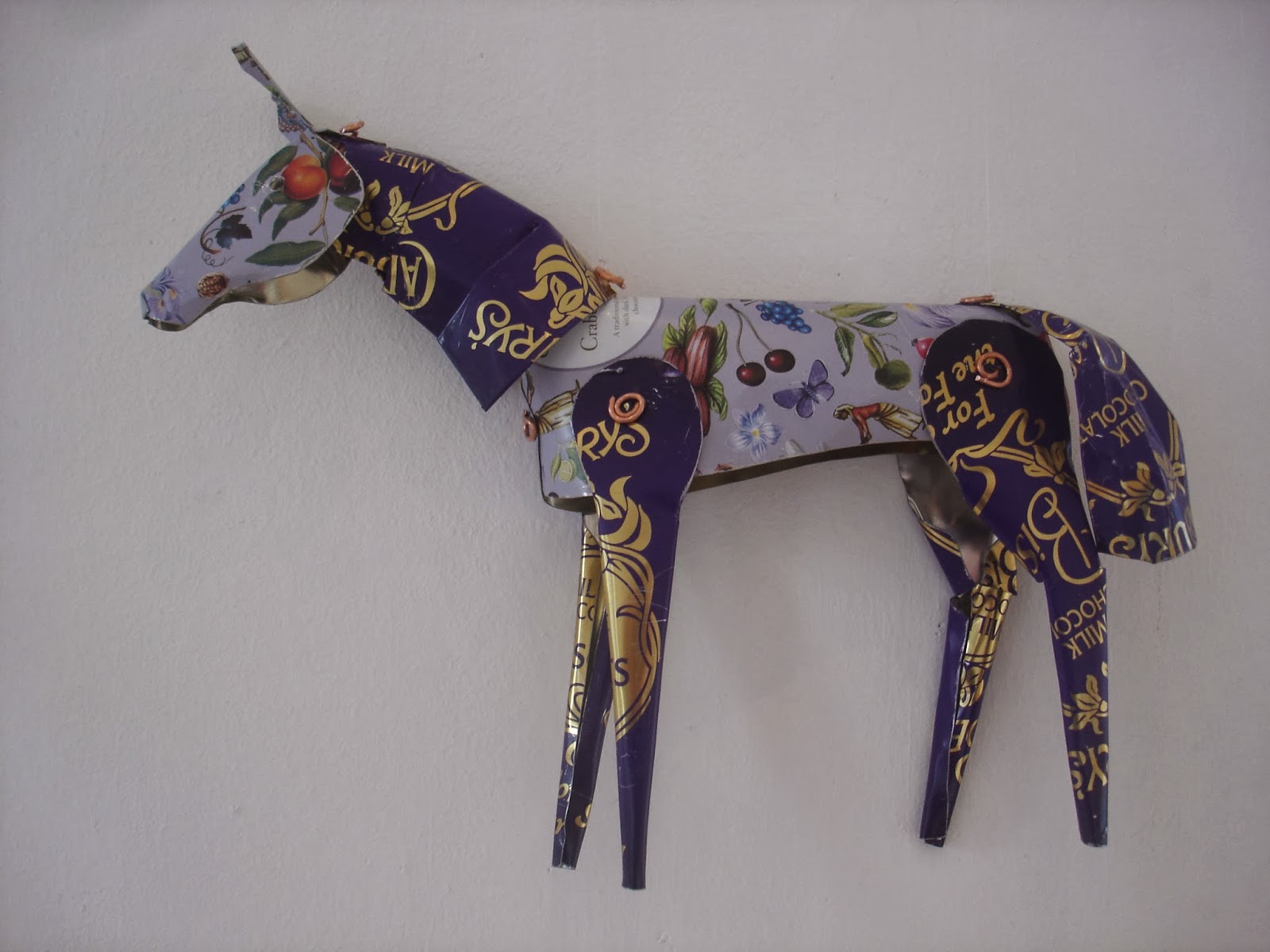 'Fruit and Nut Horse Puppet', and: 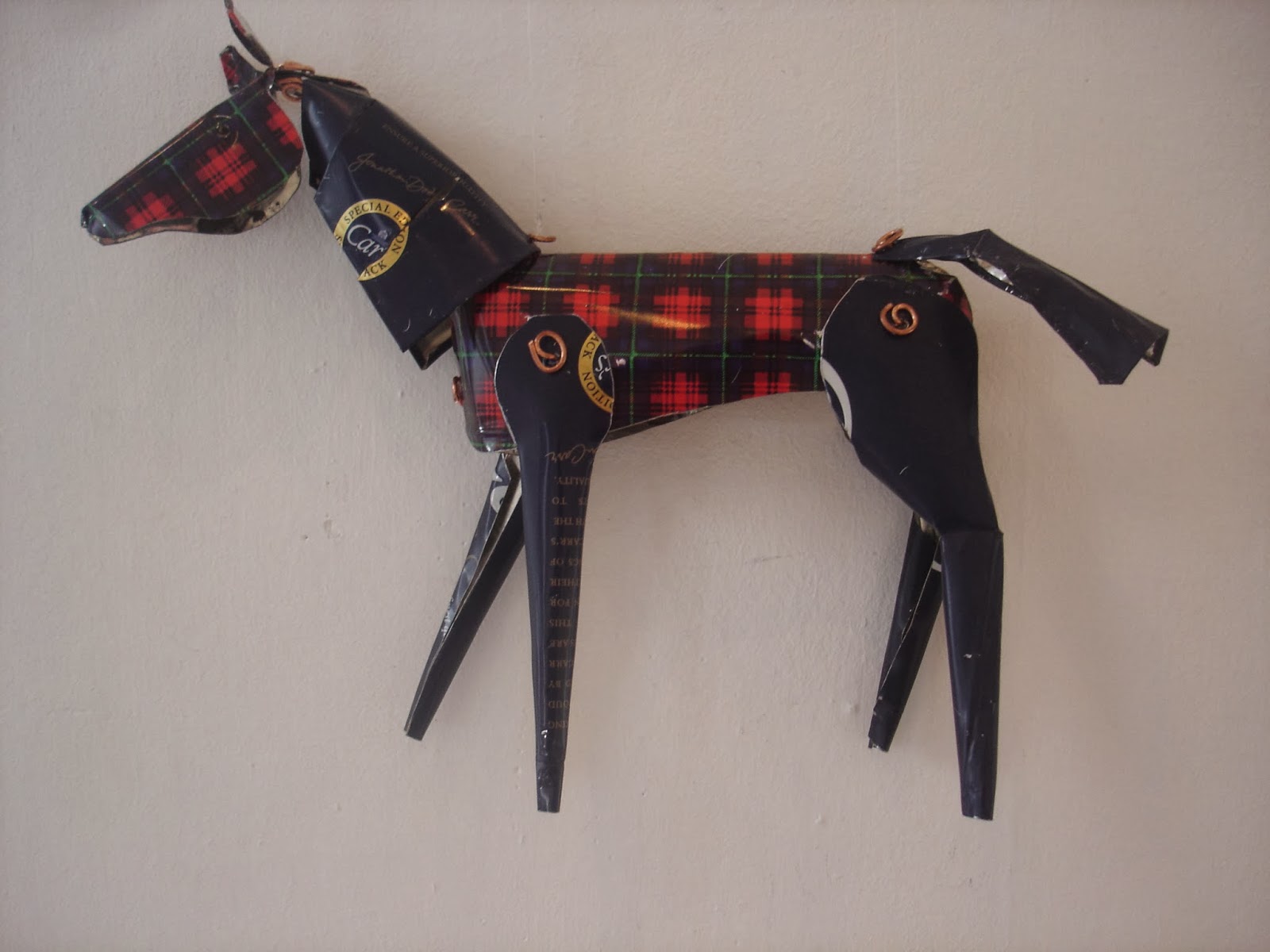 Enjoy the New Year, and we'll see you soon.
Posted by Union Gallery at 09:44 1 comment: