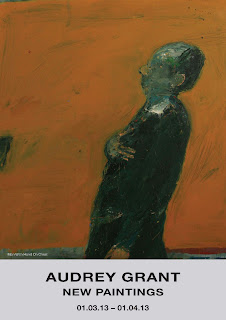 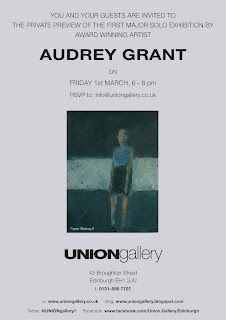 The wait was definitely worth it.
See you all for the opening!
Posted by Union Gallery at 10:19 1 comment:

Patience is a Virtue

There's just a few days more to enjoy our wonderful and uplifting exhibition, In the Company of Birds, that has been so enjoyed by those who have found the time to come to UG in February.

It would be remiss of us not to look in a little detail at some of the beautiful work created by artist Jenny Matthews specifically for this exhibition.
Have a look at this: 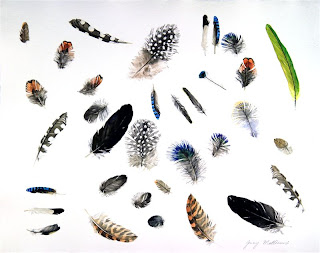 'Birds of a Feather I', watercolour on paper, by Jenny Matthews.
And this: 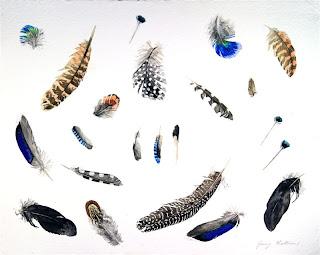 'Birds of a Feather II', watercolour on paper, by Jenny Matthews.

It will come as no surprise to learn that these two stunning paintings have attracted a great deal of attention since the exhibition opened.  They are quite, quite beautiful, and a testament to the immense talent that Jenny Matthews has at her disposal.  They are also testament to her commitment and attention to detail.  As she explains:
'The feathers are so beautiful that I wanted to paint them as studies. The green feather I found in the Lake District 4 years ago, there are Jay feathers, Pheasant, Peacock, and seabird feathers from Tyningham beach. The black and white spotted ones are from my husbands sister’s wedding when his mother dressed up in the evening to entertain the guests in a hat decorated with feathers from a neighbour’s Guinea Fowl flock (they’re all farmers round there)! Note that I don’t use white gouache or masking fluid: the white is the paper.'

So, these paintings have been some four years in the making!  Jenny collects items of interest wherever she goes, knowing that one day the right painting will materialise for them to find a home. Here are those feathers laid out for painting: 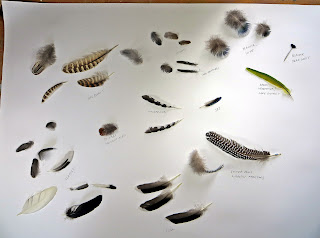 We would like to thank Jenny, and all the other artists who have taken part in In the Company of Birds, for contributing to what is an exhibition of outstanding quality and beauty.

I'd like to bring your attention to a particularly lovely piece in the current exhibition, 'In The Company of Birds'.
Some of you may have already read about it in the fantastic Spurtle review but if not, cut and paste this into your browser to learn more about it and others in the exhibition:

'In The Company of Birds' exhibition was given it's title after a painting that Janet Melrose RSW made for her exhibition here with Jenny Matthews. It was a beauty and everyone wanted it.....including me! 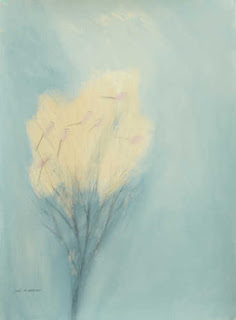 'In The Company of Birds', mixed media on paper by Janet Melrose RSW.
As you can see it was perfect and, I felt, the starting point for a fantastic exhibition.

We visited Janet in her studio earlier in the year to see what other beauties she had created for this show. To be fair all her work is beautiful, but this one really stood out: 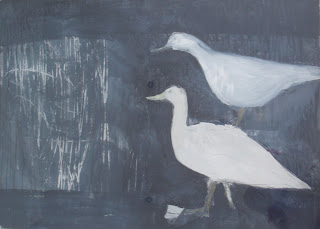 'Sir Francis Drake & Lady Penelope', mixed media on paper by Janet Melrose.
Just like 'In The Company of Birds', to my mind, this painting is perfect.
It gets its intriguing title from Janet's own ducks seen here: 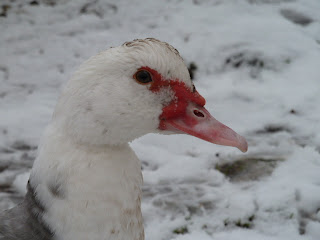 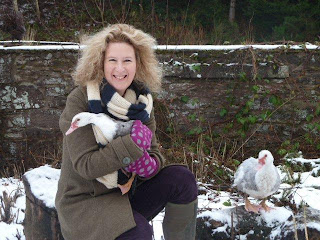 Janet Melrose RSW with Lady Penelope and Sir Francis Drake, who are Muscovy ducks originating from Asia. I didn't know that bit - Janet - told me, but it sounds good I think!
As you can see from the photo, it was white with snow in Perthshire, where Janet lives, which made driving conditions pretty tricky on our visit to her studio.
No such problems for her lovely ducks, however, who it seems enjoyed their travels in the snow...... 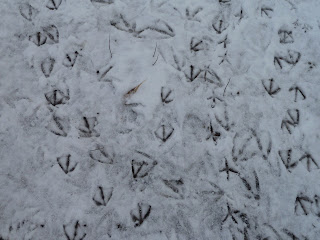 Hurry back for more tweets soon!
Posted by Union Gallery at 03:35 1 comment:

I thought you might like to learn something about the incredibly striking installation by Czech multi-media artist, Marcela Trsova, which is currently wowing visitors to the new exhibition, 'In the Company of Birds'.

Made of  coated copper wire and real feathers, Marcela has painstakingly created her own birds in flight which, hanging from the ceiling, gently sway with the drafts in the gallery.  With a solitary Jay in the middle, surrounded by Magpies and Crows, the result is quite stunning - calming, thought- provoking and menacing all at the same time. 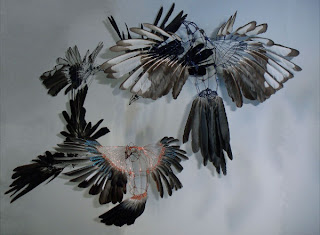 Here's what Marcela has to say about them:

"Flight has always represented freedom from the physical restrictions of  earthbound life, and the ascent of the soul to the Gods - either through mystical experience or through death.  Birds share something of the same symbolic meaning, but because they come from the skies they can also assume the role of messengers from higher powers, whether for good or for ill.
In Kabbalah, Renaissance magic, and in alchemy, the language of the birds was considered a secret, perfect language, and the key to perfect knowledge.  In many cultures across the world, the language of birds is the mystical language of angels and interestingly, the English word 'angel' comes from the biblical Greek word 'angelos', which means messengers - the messengers of the truth.
In mythology and superstition, crows and magpies have always been associated with bad omens, bad luck, or as the messengers of death.  This may be because of the colour of their feathers - black - and their nature (feeding on carrion).  The Jay however, although from the same family (corvids), symbolises truth, fairness and solidarity.  In the spiritual realm, the jay speaks of clarity and vision.  In Native American culture, the azure of the jay set against the blue sky indicated a 'double vision', or double clarity.  This visual and spiritual 'blue on blue' concept speaks of purity of the soul, truth of the heart, and clarity of the soul."

I always like and admire the research and thought that goes into all Marcela Trsova's creations, and we must also thank her for the dedication she has to her craft.  Here she is, at close to midnight, putting the final touches to The Messengers. 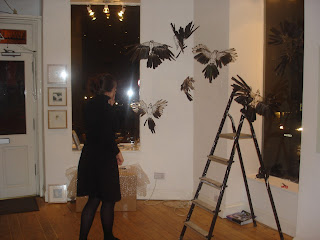 Posted by Union Gallery at 09:55 No comments:

Labels: In The Company of birds, Marcela Trsova, The Messengers, Union Gallery

In The Company of Birds II

Just thought I'd share some snaps of this beautiful exhibition and the opening night:

All calm and quiet. 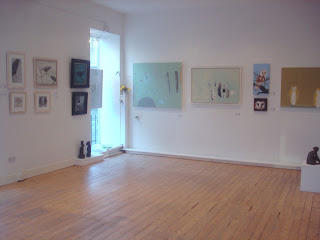 Some particularly nice Janet Melrose RSW along the back wall.
When my lottery numbers come up I'm buying the second one in from the left! 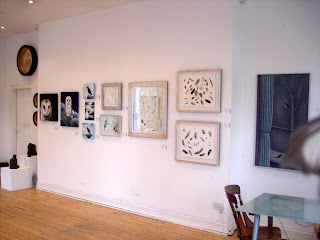 With my winnings I shall also be buying the 2 second from the right!
I think someone else will beat me to it though. 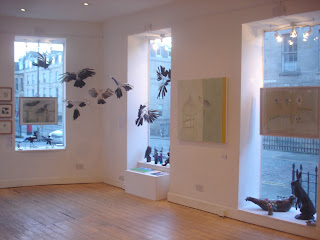 'The Messengers' gracefully flock around the windows. 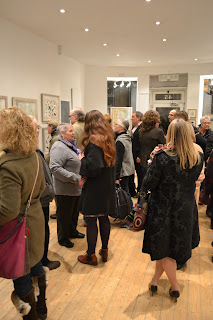 The flocks begin to arrive! 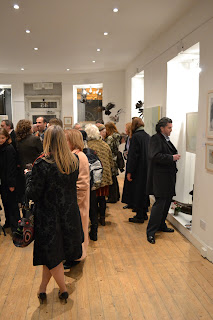 And flock around 'The Messengers'.
Leaving you with this cheeky fella: 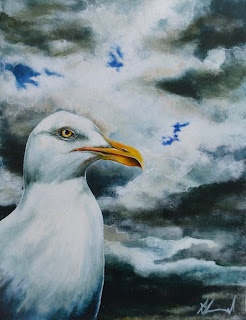 And that's goodbye from us x
Posted by Union Gallery at 09:24 No comments: 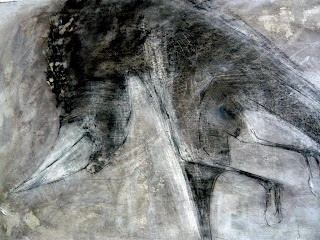 'God's Grandeur', oil and pencil on card by Joyce Gunn Cairns.
The world is charged with the grandeur of God.
It will flame out, like shining from shook foil;
It gathers to a greatness, like the ooze of oil
Crushed. Why do men then now not reck his rod?
Generations have trod, have trod, have trod;
And all is seared with trade; bleared, smeared with toil;
And wears man's smudge and shares man's smell: the soil
Is bare now, nor can foot feel, being shod.


And for all this, nature is never spent;
There lives the dearest freshness deep down things;
And though the last lights off the black West went
Oh, morning, at the brown brink eastward, springs —
Because the Holy Ghost over the bent
World broods with warm breast and with ah! bright wings.

In The Company of Birds

This month at UG sees us doing a spot of bird watching: 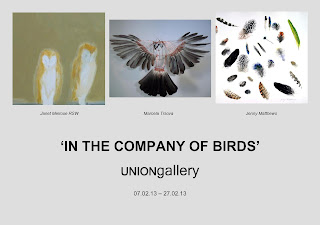 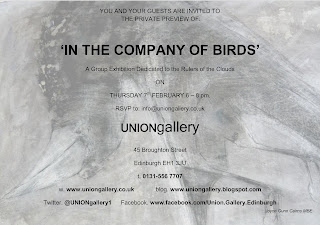 This is a must see for everyone who enjoys the company of birds!
See you all Thursday x x
Posted by Union Gallery at 09:34 No comments: