It's All a Matter of Paint

"I make easel-sized paintings. The matter of paint is where my process begins and ends. I want to be surprised by the last mark as much as I am deflated by the first. I value the facts that a decision on the size and the way the canvas is prepared influences the whole nature of the object while not impeding its possibilities. It is an environment where chance and accidents come into play offering unexpected solutions and illusionistic qualities.
As a sequence, the paintings are uneasily defined. Sometimes reacting to each other incoherently. To me figuration and abstraction are not separate ideologies, simply facts of painting. So my paintings are about the act itself. Still, I find that the historical weight of painting is forever interrupting the act like a reminder that as practitioner one has a responsibility to understand and react to the past and consequently assume a position.
Another preoccupation is to try and understand the utility of painting and it’s relation to design and craft. Through installation, framing and wood carving I explore this relation."
Zara Idelson, July 2012. 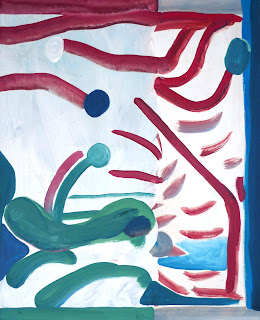 'Boconnoc', acrylic and pigment on canvas, by Zara Idelson.
Posted by Union Gallery at 09:20 1 comment:

Greetings to our new blog follower Peter (& Fly the dog!) who's adventures you can read about here:

I thought I'd just share a few more shots of the Mark Of Beauty, MOB, opening from 07.08.12 as they are bright and colourful and make me smile: 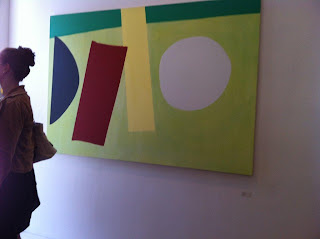 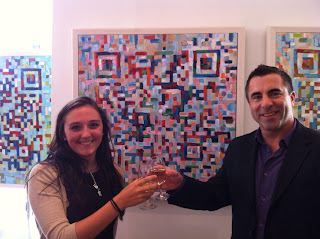 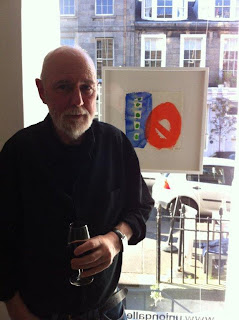 The lovely artist Iain Robertson in front of his painting, 'One'.
And leaving you with this as it really makes me smile: 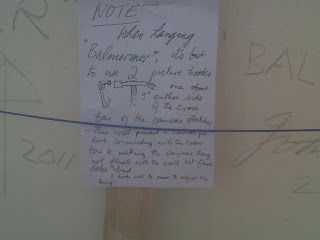 Abstract giant John Mclean leaves handy tips on how to hang his painting.
Well, you can't be too careful can you!

Speak soon x
Posted by Union Gallery at 06:32 No comments:

"My aim when I start a painting is to create a colour composition, which is only complete when my original ideas and pre-conceptions have been replaced by a purely impulsive conclusion, which surprises and satisfies me.
The work must contain an illusion of the third dimension giving a sense of some colours projecting forward from the picture plane and others appearing to recede.
The whole must have a felt continuity across the entire picture surface and not appear broken by a too deep recessive space which is the result of poor colour relationships."
Fred Pollock, 2012

'Etna', acrylic on canvas, by Fred Pollock.
Posted by Union Gallery at 09:24 1 comment:

Something Abstract and really special for a Monday morning

"My pictures have no hidden meaning.  To understand, all you have to do is look.  I work in terms of the feelings I can elicit with drawing, colour and surface.  Instinct and spontaneity are crucial.  Thought goes into it too, in the same way that it does in singing and dancing."
John McLean, 2012 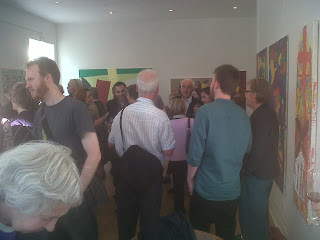 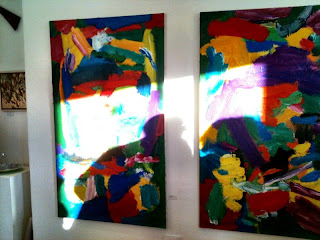 The paintings start to radiate. 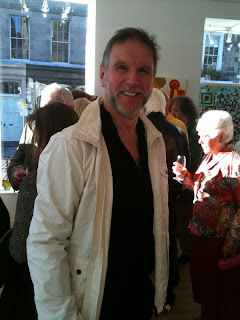 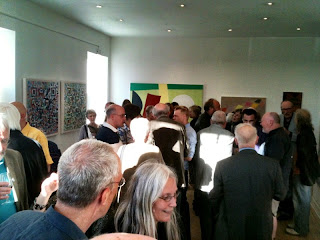 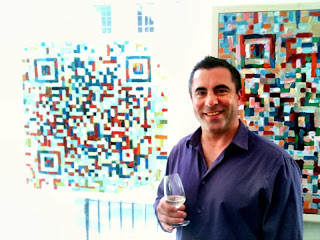 And leaving you with this.... 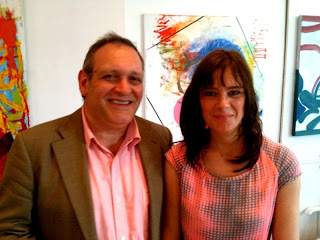 Yup. That is a REAL smile!

Have a bright and beautiful weekend all :)
Posted by Union Gallery at 08:38 No comments:

This Festival sees the arrival of a MOB to the city. 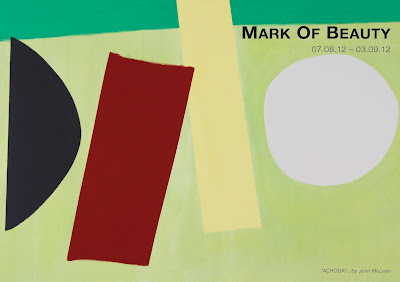 With a riot of colour! 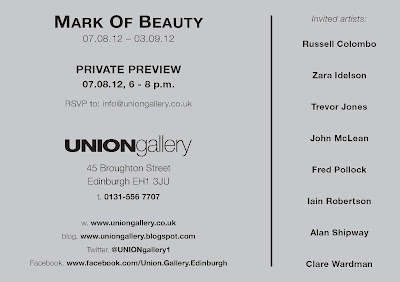 It's Festival time here in Embra, so I'm hoping you will all be popping over for a visit the the shortbread city to soak up some culture.  And, of course, to visit UG!

Those of you who are regulars to this blog may already be familiar with Leda, artist Dylan Lisle's faithful friend and studio companion: 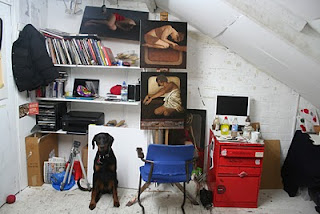 Leda has featured on this blog before a good few times, and some of you may also remember that she was stolen from Dylan Lisle last year.  Being a Doberman, she is a distinctively handsome (and valuable) breed - historically an attack dog.  Doberman's are prime targets for the increased 'dog-napping' trend by unscrupulous people whose intentions for the animals the abduct I'd rather not think about.

At barely a year old, the plight of Leda seemed to capture the public's sympathy and outrage, with a massive Facebook, blogging and Twitter campaign launched by decent people who willed her safe return.  Such was the concern for Leda that the story gained the attention of radio and print media, as well as a genuine and concerted effort from Lothian and Borders Police.

And she was found! Largely down to an individual who I feel would blush if I went into too much detail.  However, their keen observations, grit and determination ensured a police raid on the home of the perpetrator and the return of Leda to Dylan Lisle, where she belongs: 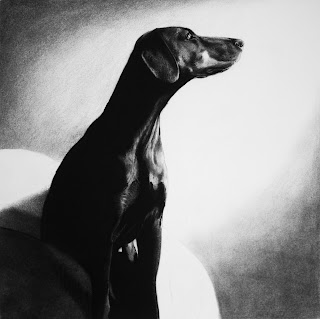 'Leda Study', charcoal on paper, by Dylan Lisle.
Now I really don't think there can be anyone who cannot appreciate that this is a top notch drawing.  This study, much like the beautiful beast herself, has gained a lot of at attention in the Claire Duguid and Dylan Lisle exhibition.

One evening, and quite by chance, a gentleman who was visiting Edinburgh for just one night walked passed the gallery on his way to his hotel.  He fell in love with her majestic stance and took her home.  He had never bought a piece of art in his life, and nor was he aware of the special bond between the subject matter and the artist, he simply adored the image and the unquestionable skill of the drawing.  He told us he just had to buy it.

As you know, I love a happy ending, so I am very, very pleased to be able to say that Leda went home.....twice.

Speak soon.
Posted by Union Gallery at 02:56 No comments: